We recognise the importance of raising awareness and understanding among young people and involving them in conservation focused activities in our area. Their enthusiasm and passion for the natural world are encouraging.
Read more..

PBL has teamed up with Waipu About Terns and Kiwi North to develop packages of curriculum- based activities that can be undertaken in the classroom, on the beach, in the bush and on school camps. Learning is led by qualified teachers with a raft of experience working with conservation and community based volunteer groups.

We have recently worked with the Mangawhai Beach School and Mangawhai Nature School to establish a rat trapping programme for their grounds and with the Waipu Surf Club Rookie Camp where the focus was on shorebirds and dune planting as well as trapping. We are very proud of the work being done with the Mangawhai Beach School Conservation Group –This term the focus of their work has been on Kiwi. A definite highlight for this group was a night walk in the bush at Marunui.

The session was led by Jackie Fanning and Matu Booth. The group met at the Tanekaha Track and were taken on a walk into Marunui. Jackie had put a tracker on ‘Buddy’, a life-sized kiwi toy wearing a tracking device. She used all the technology that would be used to find a kiwi in the bush. It worked. Using their ears, the students were able to track Buddy to his hiding spot.

Of course, any kiwi that could be tracked like this this kiwi would have to be one that had been caught, banded, and had a transmitter fitted. Earlier in the term the students had been able to examine leg bands closely as there were plenty to pass around in the Kiwi Resource box provided by DOC.

The students later got a chance to watch an incredible story recorded by a camera located near a burrow he thought might be a kiwi burrow. What he learned was something no one had discovered before. The kiwi was competing for burrow space with a rabbit. The awe and ahh sounds the students gave as each part of the contest for space unfolded showed how engrossed they were during this session.

They then got a chance to sit in the dark and listen for kiwi calls. 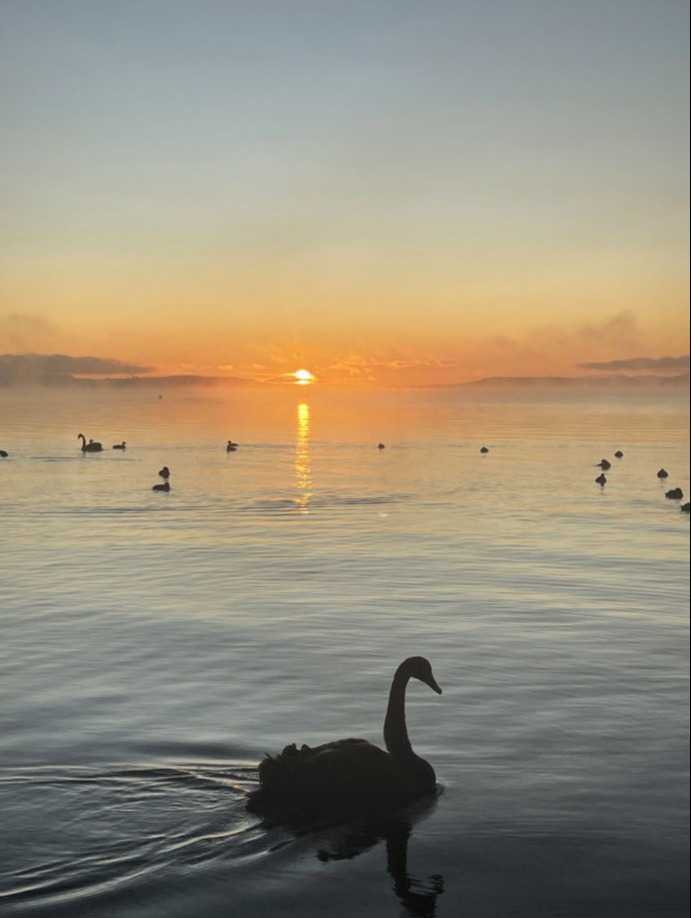 In late May 2022 the group set up a trapline. Now they wait - "Here rat, rat, rat". Thanks Susan Steedman from Waipu About Tern, PBL, Alex (Tara-iti Conservation Trust), and Robert from Conservation Coast NZ for helping make this all happen with such ease.

The Enviro Unit at MBS is totally focused on doing their bit towards a Predator Free NZ by 2050 with their term 2 programme. This term will finish with a visit to the estuary across the road and begin the connection to the birdlife. They move their study to the birds of the bush in term 3 and we are planning to focus back on the birds of the estuary for term 4 when our migratory native species return.

In June 2022 we supported the MBS conservation photographic competition with the support of photographer Aaron Skelton who judged the competition. Aaron provides many stunning images to PBL for our social media posts and website.  Aaron was delighted to see such an array of fantastic shots making it a hard decision in each category.

The overall supreme award was won by 8 year old Moeavai Finan who took a shot of a sunrise and black swan. An amazing shot, the colours in the sunrise grabbed Aarons attention straight away and then lead the eye down to the calm water. Moeavai handled the exposure on the sun very well, and the silhouette of the black swan is sharp and framed very well - the swan ties everything together. Congratulations Moeavai and well done to all the students that entered.

Big thanks also to the sponsors of the prizes. Aaron will be taking Moeavai on a one-on-one photoshoot session and also be taking home a set of binoculars donated by volunteer from About Tern and PBLs Susan Steedman, and a great Kiwi Coast beanie. The category winners will be taken on private guided night walk in Marunui Conservation area to do Kiwi listening kept warn with a Kiwi Coast beanie. 2nd place winners receive a Kiwi Conservation Club membership and a Wild Things magazine kindly donated by Glenys Mather from About Tern. 3rd place winners receiving a lovely nectar feeding plant donated by Mangawhai Natives. 1st place went to Charlie Farrimond with a beautiful action shot of this dove taking off with great colours and view. 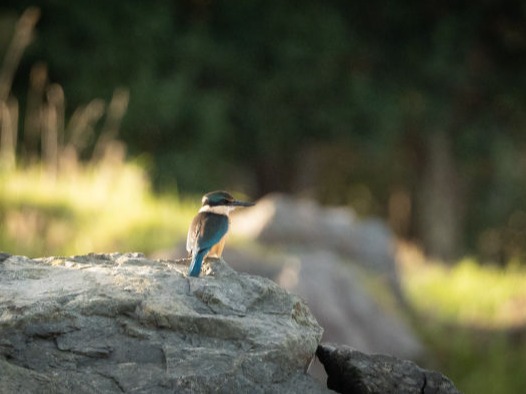 1st place went to Crush Hutchings who took an awesome shot of this kingfisher on rock - great to get close to a kingfisher at eye level. Strong colours on the bird and great blur in the background. 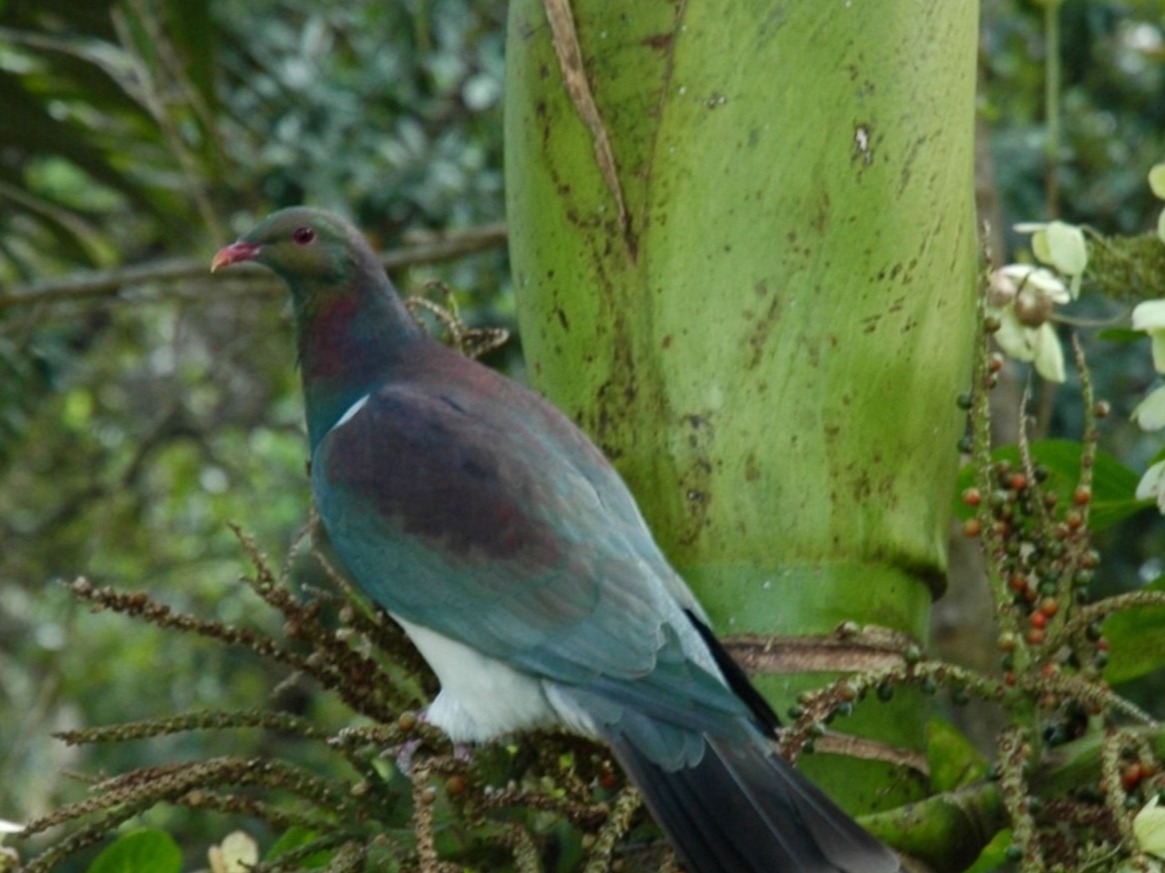 1st place went to Kieran Muller with a wonderful shot of a Kereru in Nikau. The pigeon is sharp and the eye is clear, the bird sits nicely in the frame making it very natural shot. 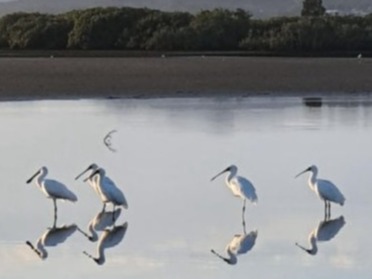 1st was awarded to Georgia Barnes with a stunning reflection shot of the royal spoonbills -centred nicely along with the cool colours, the image is nicely exposed which can be quite difficult when the bird is all white. We have a few things about to happen with the Nature School. On June 30th about twenty-five students hit the Tanekaha walking track to enjoy the beautiful Brynderwyn ranges and learn more about the bush. Big thanks to Greg Stump from Mangawhai Trackies and Waipu Kiwis who kindly guided the botanical walk with the students.

It is great to see our local schools embracing environmental education for their students, and business supporting the programmes being offered. The recent Tanekaha track adventure for the students was to continue their learning from the seed collection and propagation workshop recently run by Ricky from Mangawhai Natives. The students have been learning animal pest control including managing traps on the school grounds and recording their catch data, seed collection and propagation. The Tanekaha track walk acquainted the students with new experiences ranging from boot washing to help reduce the spread of Kauri dieback, observing eels in streams, stoat trapping, identifying native plants that have healing properties, and discussing track building and what the volunteers do.

Teacher Maree Stewart said, “They all had a wonderful time and were full of all sorts of questions and discussions when we returned.”
Greg knows the track better than most having been one of the volunteer track builders for the Mangawhai Trackies who built the track. "What a wonderful group of young people … so well behaved and smart. I was impressed by their demeanour and felt lucky to have spent the day with them."

Student Poppy could not get the smile off her face throughout the day: her great passion is for the outdoors and animals.
In the coming term the students will continue their work including taking home rat trap boxes built by the Waipu MenzShed to extend trapping into their own backyards. They will also start to learn about stream and freshwater health and how that fits into our broader ecosystem, including identification of the creatures in their school streams. Mangawhai Nature School - looking at the impact focused conservation can have.

In their recent visit to Tara Iti, students from Mangawhai Nature School looked at the impact focused conservation can have. The daytrip was extending the existing work the students have been doing around conservation such pest trapping in the school habitat.

During their visit to Tara Iti (led by the Conservation Manager, Alex Flavell-Johnson), students were able to walk from regenerating native bush to wetlands and see the sand dunes that had been stabilised with planting. It was interesting to learn that the plants used had been grown from locally sourced seed and raised in a nursery close by. Students were also able to see that plants had managed to self-seed from one wetland area to another. When they saw the beehives, they instantly thought that these for being used to produce honey. It didn’t take long for the conversation to move to the role of insects in a habitat and to how different plants use different methods to spread their seeds.

Though they didn’t see a bittern in the wetlands, they found bittern footprints in the sand. One of the things that really drew their interest was the camera that had been set up to monitor hedgehogs. One of the first things they did was look for tracks in the sand. These students have all been trapping in the school environment, so this was a good way to bring the conversation around to pests in a habitat. They diverted to look at traps to see if there was catch in any of them. These traps are different to the rat traps they use at the school and at home. These junior trappers are doing such a great job with their own trap line and with traps at home.

The number of quail moving about and skylarks singing above the group as they walked made it easy to turn the conversation to birds. On their walk along the way to Te Arai stream they encountered oyster catchers in pairs, Northern New Zealand Dotterel protecting territory, and pipits in the sand around the dune plants. All these birds are endemic. When they reached the fenced off area on the other side of Te Arai stream, they had a better understanding of why the fence was up and they were able to look at how birds use debris for shelter. Though there were whitefront terns present there were no New Zealand Fairy Tern. It is not unusual to see fairy tern close to the other the larger terns such as Tara and Taranui.

A big thanks to Alex for making the visit to Tara Iti happen and to their teacher Maree for the organisation behind such a trip.
Piroa-Brynderwyns Landcare Group also continue to appreciate the amazing support of sponsors like Mangawhai Heads Four Square, Northland Reginal Council and Waipu MenzShed who provide the rat trapping kits to the schools in the area. If you would like to get involved or know more about the school programmes in the area please reach out to Piroa-Brynderwyns Landcare Group.

Web page was made with Mobirise