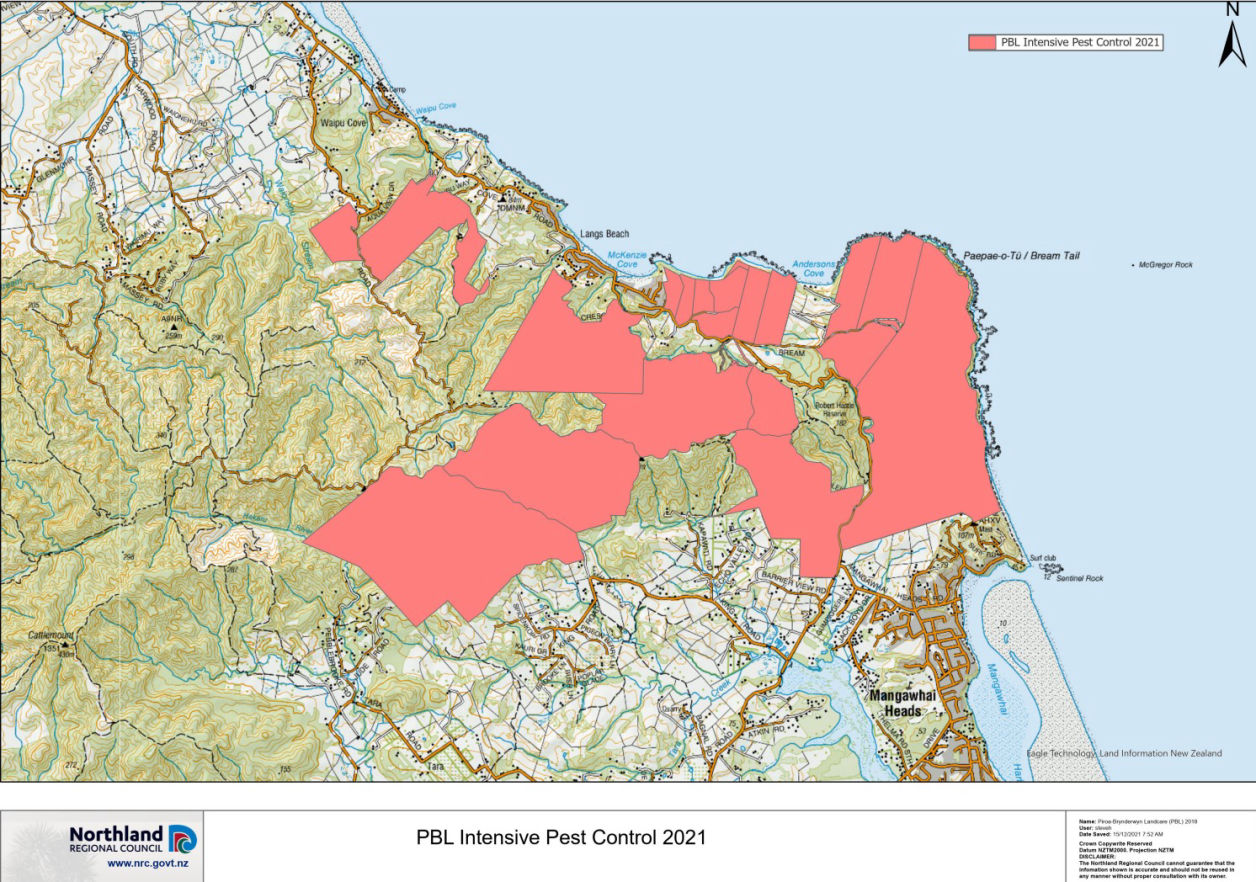 Intensive pest control has been introduced to a number of new properties during over the past 2 years. These initiatives build on work carried out over the past three decades at the Marunui Conservation property (420ha). Rats and possums are now reduced to low numbers in over 2,000ha of regenerating forest. Removal of these pests has an immediate positive impact on native flora and fauna. Intensively managed properties run from Bream Tail to Marunui and over to Waipu Cove.

Possum and rat control measures are in addition to mustelid trapping which is carried out over a much wider area (approx. 10,000ha) to protect kiwi chicks. Kiwi were observed in several new locations in 2021. Hochstetter’s Frogs, Kaka and Koromiko have also been observed. This indicates that rat and possum control is also having a positive impact.
The map shows the current area with further expansion to come.

The three reserves are surrounded by private conservation blocks. The most significant is Marunui (430ha) which has been under intensive pest control for more than twenty years. Kiwi were translocated to this property in 2013, 2014 and 2015. Other nearby conservation blocks include Waorahi (194ha), Langs Beach Estate (200ha), Bream Tail Farm (450ha) and the Sanctuary (100ha protected forest).

It was evident that public conservation land was becoming a breeding ground for rats and possums among a cluster relatively pest free properties. PBL volunteers decided that something needed to be done. With support from DOC an intensive pest control operation was initiated in 2021. Possum control was carried out by contractors in August 2021. The local community donated $15,000 to cover this operation.

The major task of installing permanent bait stations began in December 2021. A network of approximately two bait stations per hectare was required – 650 in total. This task was mainly carried out by a small team of volunteers. An Air Force team along with DOC Rangers and NRC Biodiversity Officers boosted progress during a team building exercise in May.

In August volunteers, DOC Rangers and NRC Biodiversity Officers delivered 500gm of pre-feed to each of the bait stations. Two weeks later any remaining pre-feed was replaced with 500gm of toxin. It was noted that pre-feed had been completely cleared out in more than half of the bait stations. This observation confirmed that possums and rats were present in very high numbers.

In 2021 Waorahi carried out an identical operation using Sodium Flouroacetate (1080). Tracking tunnel index for rats before the Waorahi operation was between 50% and 80% (very high). After the operation this index fell to zero. Rats and possums killed by 1080 are toxic to mustelids and feral cats. This is the most significant advantage associated with this toxin.

Two weeks after toxin had been placed the bait stations were emptied. Remaining toxin was carried out and weighed. It was found that 82kg of 1080 had been consumed which works out to 250gm per hectare. DOC rangers advise that this high take up will have removed hundreds of possums and thousands of rats. More importantly trap shy mustelids and feral cats will also have been heavily impacted.

The Three Reserves Toxin Operation has linked three existing conservation projects to form an inland island of more than 1,500ha. This is a very significant development which is expected to significantly boost native bird populations in our district.

Start a site with Mobirise