Monitoring our native bird species in the ranges...on November 13th a group of keen conservationists gathered to learn from Dr Dai Morgan from Northland Regional Council (NRC) about monitoring native bird species and density in the ranges. The work is important as over time this will provide evidence around the impact Piroa-Brynderwyns Landcare (PBL) Groups pest control programmes are having, and what new species are returning to the area.

Over the past couple of years PBL group is noticing more species comfortably reside in the areas where rats, possums and mustelid are controlled. 2 years ago Bream Tail Farm saw breeding kiwi return and more recently bellbird and kaka - all three species now recorded regularly on the property. Over the road at Waorahi Conservation Estate bellbirds have returned and other native species are growing in numbers, but the Marunui Conservation estate continues to be the hub for kiwi conservation in the area along with other species such tomtit, bellbird, grey warbler, ruru, kererū, pīwakawaka, fernbird, and shining cuckoo.

With other landowners joining the journey, and the 3 large DOC reserves in the rangers now part of the pest control programme, the group expects to see broader spread of native birds given there is increased safe habitat to reside. The team of 20 local volunteers will now monitor key bush sites to track and record a collection of key native species. Some of the volunteers will also be working with the local schools to train up the students to assist and get them involved as part of their conservation curriculum.

The group has a second bird survey also underway - this one targeted specifically to kiwi. Piroa-Brynderwyns Landcare Group, in partnership with NRC, are undertaking a survey to see where kiwi have dispersed to in the ranges. The team knows that 43 birds were re-introduced to the bush at Marunui, up King Rd, from 2013 to 2016 with 6 more rescued birds arriving in 2020. Lots is being done in the area to protect these amazing birds, but little is known about how they are doing. Wrapping up the field work at Bream Tail Farm The survey aims to understand the extent of kiwi movement now that large areas in the ranges are actively under pest control by wonderful teams of volunteers and landowners. Where are the birds now? Are they breeding successfully? What is the population now? Are we doing everything we can to keep them safe? The first step in answering these questions is to find where they have established territories, and this can be done by listening for their distinctive calls.

To help gather data for this survey, we are asking for help from local people. If you think you are hearing kiwi at night, we would love to hear from you. Please email [email protected] or text Tace on 021 048 0011.
Thanks to everyone who has already responded to let us know they are hearing kiwi.
Not sure what a North Island Brown Kiwi sounds like? Head to the Save the Kiwi website and look under kiwi call/kiwi facts. 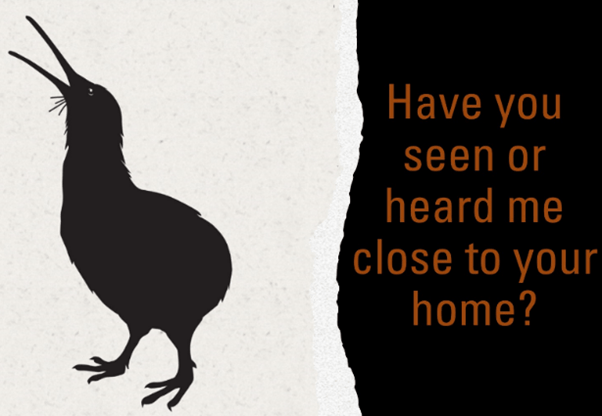 Built with Mobirise - Get now